February 28, 2020
This week’s PhDetails is with Rose Peterson who studies at George Washington University in Washington, DC. Rose completed her Bachelor of Science at Virginia Tech in 2016 and majored in Biology. While she was at Virginia Tech, she started off working in ecology labs studying invasive species, but after her sophomore year, she discovered the world of systematics. For the remainder of her undergrad, Rose worked in a plant systematics lab with Dr. Khidir Hilu investigating gene informativeness for floweringplants (Angiosperms). After Graduation, she travel with Dr. Rolf Muelers engineering lab to Jinan, China, where she spent three months studying bioinspired technology using bats as a model system. After Jinan, Rose took nine months off before starting her Ph.D. in August 2017. She told me that her current research focuses on understanding convergent evolution for freshwater African electric fishes (Mormyridae). You can find Rose on Twitter @fishtastic_evo! 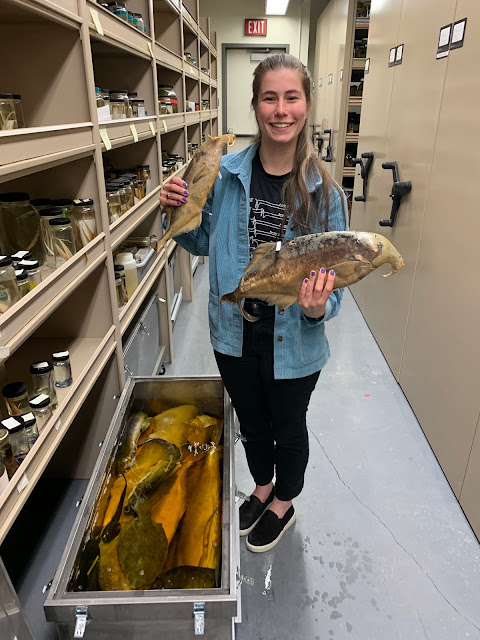 Well let’s start off talking about completely unscientific stuff: What is your favourite band/musical artist pre 1980?
Hmm, pre-1980 would probably be the Beatles or the Mamas & the Papas. Basically, the stuff I grew up listening to with my parents.

Favourite band/musical artist post 1980?
Oh man, this is hard I don’t think I can pick one: The Hinds, Oso Oso, Prince Daddy, and the Hyena, Juice Wrld, Joyce Manor, and Earl Sweatshirt!

Favourite movie?
I have to go with Heathers, Winona Ryder is such an amazing actor, and the movie is basically a dark Mean Girls! I highly recommend it to anyone who has not seen it yet!

Do you listen to podcasts?
Yes, I listen to a ton of podcasts I have a 40-minute metro commute, so I listen to a bunch. I love The Daily (by the New York Times), Radio Lab (my life goal is be interviewed by them), 99% invisible, and true crime podcasts.

Where do you study and who is your supervisor?
I am supervised by Guillermo Ortí at George Washington University in Washington, DC!

What year of your PhD are you in?
Third-year, I can’t believe it has gone by this fast!

Who’s giving you the money – and for how long?
When I committed to GW, I signed a contract for 5 years of funding from the biology department. After my first year, my advisor moved me to his NSF grant to help process the influx of tissues and data. After being on his grant for two years, I will be moved back to the departmental funding for the remainder of my PhD.

Do you have any publications?
Not yet, hopefully soon, though!

Did you do a masters – where was it and was it about?
Nope!

Do you do fieldwork? What is the best fieldwork you have ever done and what made it great?
So far, I have only done one field expedition to Iquitos, Peru, to collect electric knifefish. One of the things that made it so great was getting to see the fish alive in their natural habitats since I mostly work from my laptop, or on museum specimens. 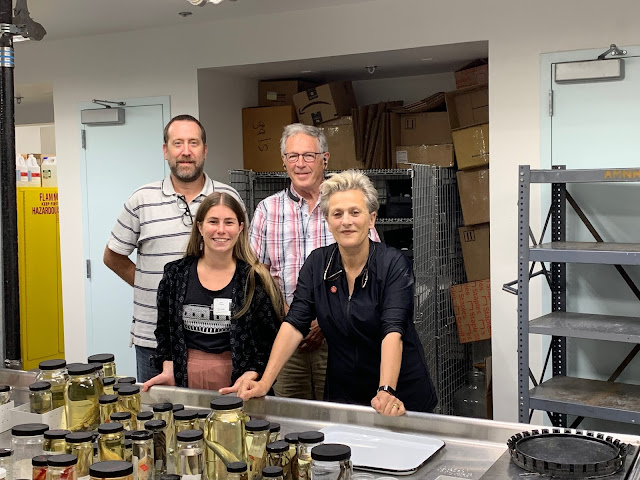 How many PhDs did you apply for – what were you looking for?
I think four labs. In my undergrad, I worked in several different types of labs and found that I was most interested in systematic research. So, for grad school, it was important for me to find a lab and department that had a strong systematic program.

What is the most bodged piece of equipment you have had to use during field/labwork – did it work?
I wanted to record the electric signals of the fish we were collecting in Iquitos. The electric signals are species-specific and often sexually dimorphic but have never been documented in the fish we were collecting. However, the program for recording them only worked on PCs and so, I bought a really cheap PC tablet. The tablet, fortunately, worked for the trip, but after returning to the US the tablet completely died.

What one piece of advice would you give to a masters student applying to PhDs now?
Visit the labs, and talk to the graduate students, ask them about the department and your PI. Graduate students tend to be more candid and which can help you determine if you will be happy in that program.

How often do you meet with your supervisor?
We have a lab meeting once a week, but he generally spends part of his day in the lab, so he is easy to track down.

What supervisor traits are important to you?
Enthusiasm for research projects that both within and outside their specialty.

What do you think are the worst supervisor traits?
Slow to answer emails… I know it happens to everyone hahah

In one sentence what is your PhD about?
I am studying convergent evolution from using a phylogenetic framework to understand how cranial facial morphologies within the family Mormyridae evolved at a genetic level and tissue level. 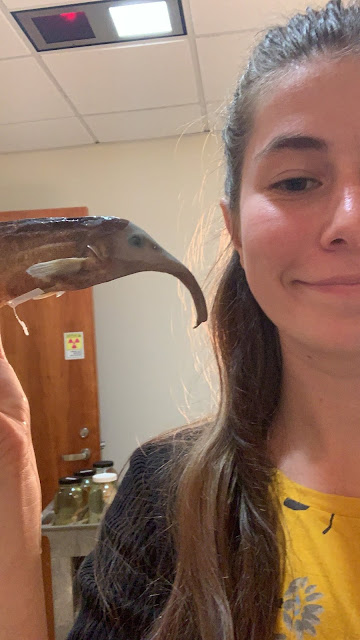 What has been your academic highlight of the last year?
I think I have to go with presenting my research at Evolution and the Joint Meeting of Ichthyology and Herpetology. I was so so nervous, but it was so rewarding and felt really good to get feedback from others.

Have you had an academic lowpoint of the last year – if so what happened?
I wouldn’t say a low point per se, but when I get up caught up in comparing myself to others, I tend to feel inferior.

Which academic idol/scientist have you met?
Carl Hopkins and now he is one of my collaborators and just an overall great person!

Which academic idol/scientist would you most like to meet?
Do they have to be alive? Can I say, Mary Kingsley, I recently read Travels in West Africa, and she is such a badass! She refused to wear anything besides her petticoats in the field, which turned out to be a good thing because she fell in a spike pit and was saved by her petticoats!
Someone alive would probably be Neil Shubin because, in undergrad, I read his book your inner fish and watched the PBS specials.

Who has been your academic role model/inspiration and why?
I think my grandfather, Douglas C. Pratt, was botany professor at the University of Minnesota and later became the Dean of Biological Sciences. As a kid, I would spend summers at the lake cabin he and my grandma owned. He taught me an appreciation for nature by teaching me to fish (along with my other grandpa), catch frogs or fireflies and find the best wild raspberries. These experiences led me to pursue biology as a career. 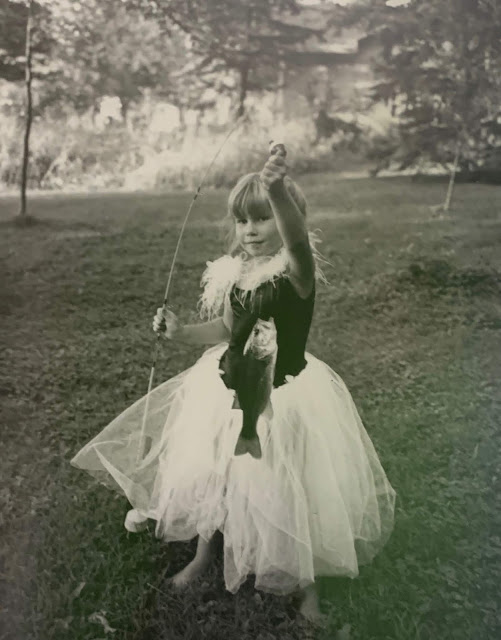 Do you have a favourite paper?
Genomic insights into mite phylogeny, fitness, development, and reproduction Zhang et al. 2019
I really like this paper because it comes so many different types of data to really dig down and understand the evolution of the organisms.

What has been your favourite conference so far – why?
Evolution because there is a wide variety of talks both regarding the organisms and discipline and every talk I attended was fantastic!

What hours do you typically work?
Typically, I work 8:30-6:30 and sometimes Sunday afternoons.

How do you avoid procrastinating?
I like making physical lists for the week so I can scratch off what I achieved and see what I still have left to do. I also log out of all social media accounts, so I have to physically login and not just absentmindedly open Instagram.

What motivates you in your day to day PhD life?
Curiosity in understanding the evolution of peculiar adaptations, such as the schnauzenorgan.

What do you do when you’re not working – how do you balance it with your PhD?
When I’m not working, I like to run, brew kombucha, meet up with friends, and I’m an avid horror movie enthusiast. Honestly, sometimes it’s tough to balance my work with things in my life outside of work. I try to set limits on how long I am going to work on a specific task before I move onto the next and to take weekends off.

If a genie could grant you one wish to help with your PhD what would you wish for?
No queue times on our High-Performance Computing Cluster. 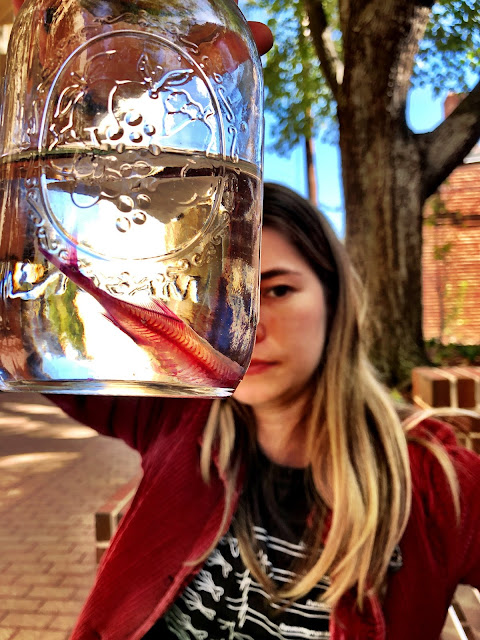 What would be your dream job?
My dream career would entail being a curator at a museum, but working at a museum will suffice.

Where do you see yourself in 5 years?
Hopefully, I’ll be Dr. Peterson holding down a Post-doc position and applying to museum jobs!

One word to sum up your future in academia:
Enthusiastic

What do you want to achieve outside of academia in the coming year?
Running a half-marathon, as long as everything goes right, I’ll hopefully be completing it the end of March!

What essential tool hardware/software could you not do your PhD without?
My laptop, for sure!

Where is somewhere you would like to work in the future?
The Congo River Basin so I can see mormyrids in alive in the wild!

Do you have a favourite organism?
Hmm, I think all the organisms I love have weird snouts like elephants, weevils, and mormyrids. I have a hard time choosing between them.

Are there any social interactions/meetings which have enhanced your PhD experience?
The graduate students are really close in our department, and we try to organize social activities such as a happy hour or potlucks once a month. We also play in a kickball league. For me, it has been really important to socialize with others who understand what it is like to be a graduate student.

If you could change one thing about your group/department structure what would it be?
Hmm, more goat cheese at our wine and cheese after the weekly seminar!

What major question in your subject area is yet to be addressed – why is it important and why isn’t anyone addressing it?
I am interested in convergent evolution, which I feel like many other people are well. However, often times, it is only tackled from a singular perspective – either genetically or morphologically – rarely combining the two. 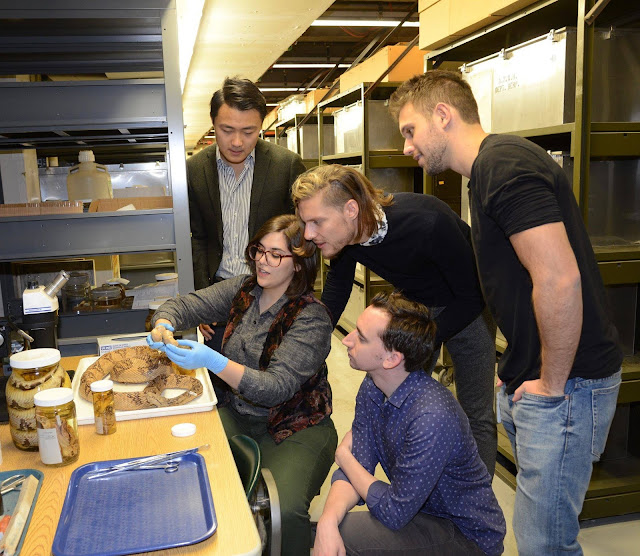 This weeks PhDetails is with Maggie Lazzeroni. Maggie was raised in Sussex County, NJ and is now a Brooklynite, doing her PhD at the Richard Gilder Graduate School at the American Museum of Natural History. Her research is inspired by a natural curiosity in the invisible details that make organisms function the way they do. This curiosity led Maggie to transfer to a biology major during her undergrad, through her masters at Columbia University, and now to her PhD. Maggie’s current research is focused on understanding how substitutions in the genome, which have accumulated over evolutionary time, has influenced the evolution of live-birth and egg-laying in pit vipers—an awesome group of highly venomous snakes. She hopes this work will provide scientists with a foundation for studying the genomic underpinnings of reproductive modes in other snakes and lizard groups, and it will help us understand the precise mechanisms that underpin processes involved with egg-laying and live-birth. 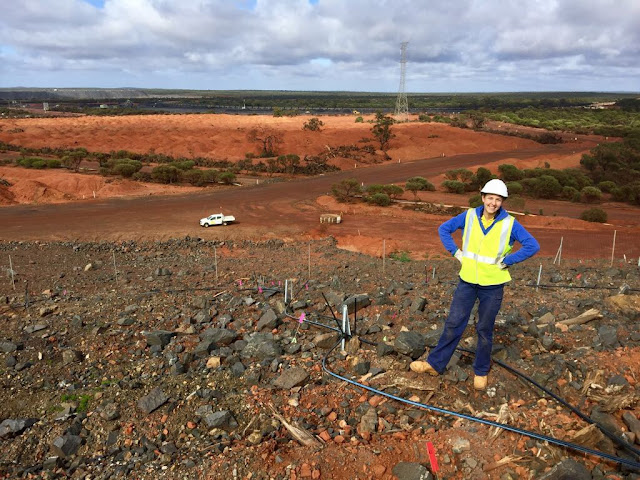 This week's PhDetails is #101 with Siobhan Sullivan. Siobhan grew up in Western Australia and completed a Bachelor of Science in Geography and Conservation Biology with honours from the University of Western Australia. Her honours research focussed on the drought tolerance of Eucalyptus species from southwestern Australia. This then led onto her PhD project at UWA in collaboration with Kings Park Science, which investigates how water stress limits plant establishment, especially in disturbed landscapes. You can find Siobhan on Twitter @SullivanSiobhan ! Well let’s start off talking about completely unscientific stuff: What are your favourite band/musical artists pre 1980? Frankie Valli and the Four Seasons, ABBA and Queen.  Favourite band/musical artists post 1980? Stella Donnelly and San Cisco.  Favourite movie? About Time. It’s sweet and wholesome and I love it. Do you listen to podcasts?  I don’t listen to as many podcasts as I did when I was deep in the data collection stage of